As distributors, we spend a lot of time selling, delivering, and displaying beer.  We don’t often get to make it.

But one of our own, Atlas Sales Team Leader Mike Hall, recently revealed a hidden brewing talent.  A beer he brewed was selected last month as a “Brewmasters’ Favorite” home brew in the Right Brain Brewery Distributor-Only Homebrew Competition.

A lot of thought went into the special beer that Mike brewed with his friend Kris Winkle, a teacher at Portage Middle School.

“Our beer was a Belgian Amber finished with habaneros.  We called it ‘Belgian After Burn,’” Mike said.

“Right Brain likes to do some funky things, so we thought the habaneros would be different.  They actually paired really well with the Belgian yeast we used.  It turned out not too spicy, with just a hint of habanero at the end.”

Mike and Kris admit that they had never made that kind of beer before, but they were pretty happy with how well it turned out.

The Right Brain brewers were also impressed.  Belgian After Burn didn’t win the highest number of points in the competition (it was a close second), but the brewers liked it enough to invite Mike and Kris to come to the brewery for a collaboration.

Mike and Kris headed to Traverse City and spent a day brewing a 7-barrel batch of Belgian After Burn with Right Brain’s brewers on the brewery’s production equipment.  They had a great time learning how to take their home-brew sized batch and super-sizing it into over 1700 pints of beer. 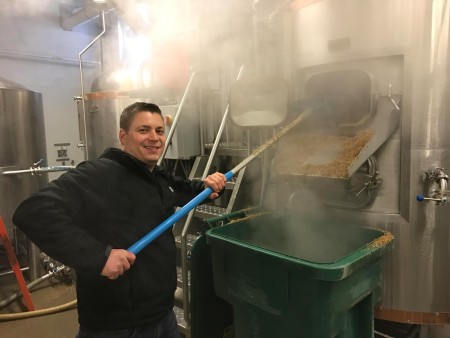